In this short guide, we'll see how to convert HTML to raw text with Python and Pandas. It is also known as text extraction from HTML tags.

In this Python guide, we'll use the following DataFrame, which consists of two columns. Column html contains HTML tags and text inside the tags:

We would like to extract the raw text from the column without the HTML tags with Python:

First we will need to install Python library - beautifulsoup4 by:

The official documentation of the library is available on this link: Beautiful Soup Documentation.

The Beautiful Soup is described as:

Beautiful Soup is a Python library for pulling data out of HTML and XML files.

Now let's check how we can extract the text from HTML code or tags in Python. We will demonstrate the extraction in simple example.

Suppose we have the following HTML document:

We can extract the raw text from the HTML tags by:

Which will result in:

Or we can pretty print the HTML code by:

In order to convert HTML to raw text we will apply BeautifulSoup library to Pandas column.

To apply the BeautifulSoup function soup.get_text() to Pandas column we can use the following code:

How does it work? We are applying the function .get_text() with html.parser to each row from the DataFrame - df[['html']] - in this case it has only a single column.

If we pass non HTML column or NaNs we will get errors.

In this post, we saw how to convert HTML tags or document into raw text with Python and Pandas.

The image below shows all the steps which we covered: 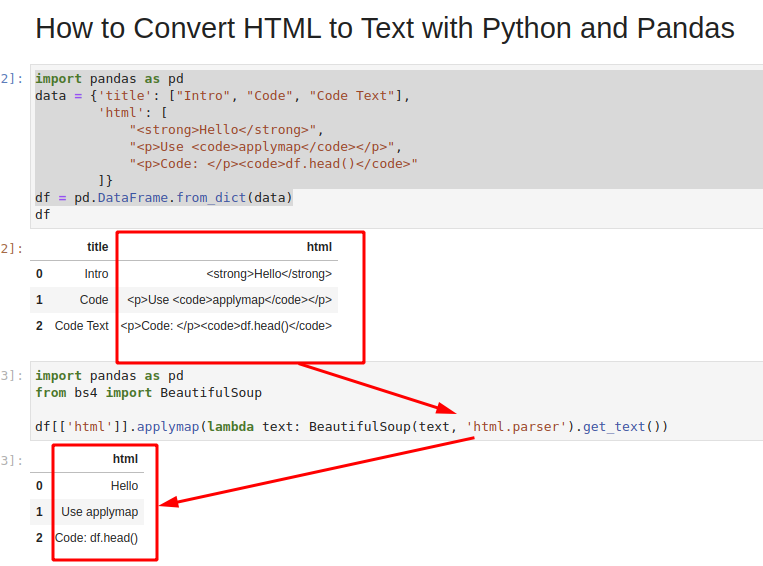